Watch this video on

Jack outlines the current income inequality situation and its causes and then opens the discussion to the audience to explore practical solutions to bring about a more egalitarian society.

Jack Barker is an environmental and social-justice activist and a SEA member who is passionate about bringing about a much more equal and sustainable world. 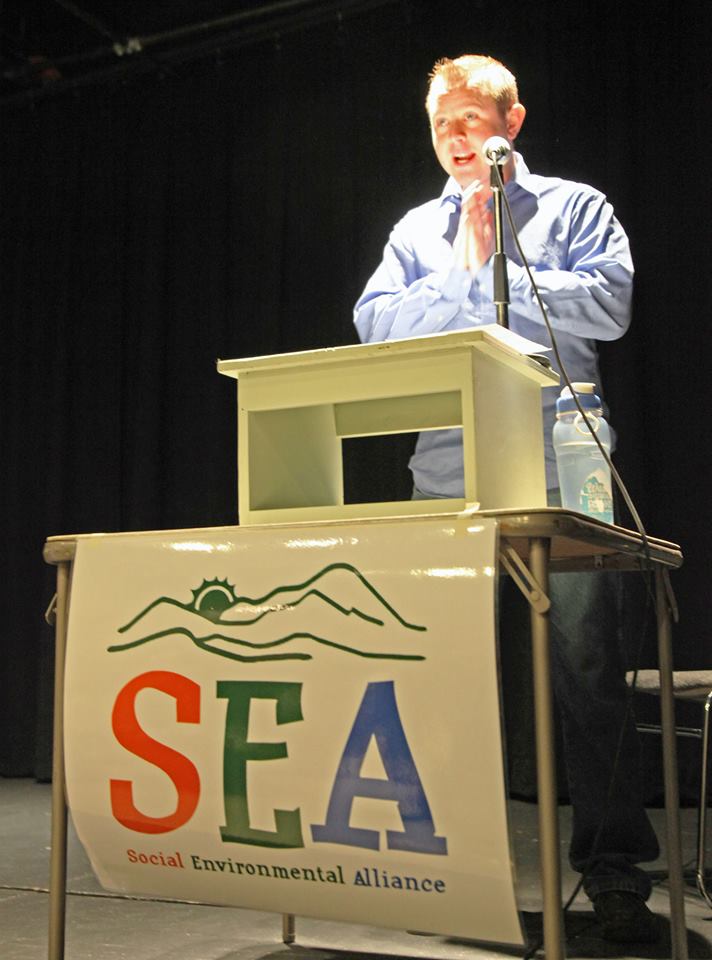 Hello my name is Jack Barker and I am a member of the Social and Environmental Alliance, and an activist here in Victoria.

I am here today to talk to you about the growing gap between the super rich and the rest of us, commonly known in politics as ‘Income inequality’. This is something that I am very passionate about and I hope that my passion will spread to you tonight after you have heard what I have to say. My full speech will be made available on the SEA website in the coming weeks, complete with all my sources.

Income inequality is defined as how evenly or unevenly income is distributed in a society. Since the Occupy movement highlighted the issue of the 99% and income inequality, it has changed how we view the economy as well as becoming a crucial talking point in the US Democratic Party’s arsenal. In his 2012 State of the Union speech to America, Barack Obama called it ‘the defining issue of our time’. Jack Layton and the NDP also began to talk about it here in Canada, and in the UK, The leader of the Labour Party, Ed Miliband has made income inequality his defining mission when he gets into power. There have been inequalities of income of some kind for a long time of course, but since the 1980’s the situation has got worse in most western developed nations.

Let me give you some statistics on inequality….

The richest 1% own almost half the world’s wealth ($16 trillion); the richest 85 people in the world have as much combined wealth of the poorest half of the world- 3.5 billion people; the richest 10% own 86% of all assets, whilst the poorest 70% own just 3% of the world’s assets; the combined wealth of Europe’s 10 richest people is more than the total cost of the stimulus measures implemented across the EU between 2008 and 2010. In the US, 95% of all income gains between 2009 and 2012 went to the top 1% of earners. This increase in income share of the top 1% is at its highest level since the eve of the Great Depression.

Here in Canada, among those below the top 10%, there was virtually no change in real income growth between 1982 and 2010, whereas the top 0.01% saw a jump of 160%. In Canada, the late 1920’s, the average CEO was making 25 times the average worker. In 1995, CEOs earned an average of 85 times the amount of the average worker, and today’s CEO makes roughly 250 times. And of course there’s no evidence to suggest today’s CEO’s are more talented, productive or hard working than their 1920’s counterparts, and certainly not 10 times.

The median wages and salaries of Canadian workers, adjusted for inflation, have not grown for the past 3 decades. And according to Statistics Canada, BC is the most unequal province, which also has the highest rate of overall poverty in Canada, and BC has had the worst rate of child poverty for nearly 10 years. So this is happening right under our noses.

So for the last 3 decades the tables of the super rich have overflowed, with hardly any scraps falling off for the rest of us. For too many people, the gains from growth happen somewhere else, for someone else. It’s time to spread the wealth from the privileged few to the many.

Even the people at Davos have said that the gap among the rich and the poor is the largest threat to the global economy in the coming years.

But for me it’s about more than the economy- it’s about an increasing power and influence over the government, it’s about how the wealthiest groups and individuals can capture political power at the expense of the rest of society. Such examples of how they exert influence are through massive campaign contributions, the forming of political parties, writing of party platforms, selection of candidates, drafting and amending of legislation, and shaping of public opinion through think tanks and media ownership, like Mr Murdoch and Fox News.

As wealth has acculumated at the top, taxes have been reduced on the wealthy, and tax loopholes have been brought in, because of their lobbying. A significant share of the income of the super rich, like capital gains and stock options, are taxed at a much lower rate than income from regular wages and salaries. Other examples are larger subsidies, bailouts and tax breaks for large corporations. This is a danger for democracy, as it means the government increasingly works for the 1% and not the working people of the country.

As the American lawyer Louis Brandeis once said, “We can have democracy, or we can have great wealth, concentrated in the hands of the few. We cannot have both.”

Along with income inequality, one of the most important topics of our generation is climate change. And as we try to urge people towards climate justice, one of the key obstacles to change is inequality itself, because it undermines trust that ‘we are all in this together’. None of wants to feel that we are making great efforts to reduce our own greenhouse gas emissions, only to have the wealthy buy their way out of the changes they have to make.

Climate justice research shows that Canadian household carbon emissions are highly unequal, the wealthiest 20% of Canadian income earners are responsible for almost double the greenhouse gas emissions of those in the poorest 20%. This means that even if the richest Canadians successfully reduce their household emissions by 30% by 2020, they will still be emitting more than the poorest 20% of households do today. Therefore income inequality isn’t just a moral problem, it’s also a practical one in terms of getting to a carbon neutral society. Also Richard Wilkinson and Kate Pickett, authors of the book ‘the Spirit Level’, that shows many damaging effects to society as a result of income inequality, have shown that societies with less inequality are also more open to embracing environmental actions.

As shown by Wilkinson and Pickett, extreme income inequality has a clearly negative effect on a wide range of health, social and economic problems too. Less equal societies have more disease, more mental health problems, higher infant mortality rates, reduced life expectancies, and less social cohesion. The effects are most pronounced at the bottom but are evident throughout society. The fact is, more equal societies are not only better for the poor, sick and disabled, but also more prosperous as a whole. And when I say prosperous, I’m talking increasing the wider good, not GDP. The Nordic countries with the highest taxes on the rich have both the smallest equality gap and high living standards.

So in order to understand the possible solutions to this problem, let’s first look at the causes. As I mentioned earlier, the situation started to get far worse in many rich developed nations in the 1980’s. So the same time that Thatcher came to power in Britain, and Reagan in the US. Thatcher brought in tax and benefit policies that favored the rich, making millions unemployed, and meaning that the percentage of households in poverty increased from 13% in 1979, to 22% in 1990 when she left office.

Several studies show that weakening the power of trade unions may be an important part of the reason why inequality has increased. A 2012 study by five UBC economists concluded that roughly 15% of the growth in income inequality in Canada through the 1980’s and 1990’s was directly linked to falling rates of unionization.

In Canada, the proportion of workers represented by unions in 1984 was 42%, it has been on the decline ever since, so by 2011 it was only 31%. Since 1982, federal and provincial governments have amended labor laws more than 64 times in ways that restrict the ability of unions to organize. More laws restricting labor rights than at any other period in the history of Canadian labor relations. So may I remind you of an earlier statistic- since 1982, there was no virtually no change in real income growth for those below the top 10%, whereas the top 0.01% saw a jump of 160%.

And with Harper in charge of the country, bringing in regressive policies that favor his corporate chums and the wealthy, such as further legislation that curbs workers’ bargaining power, income inequality is only going to increase. Robin Boadway, a professor of economics at Queen’s University, told Canada’s House Finance Committee, that Canada’s tax system is designed to exacerbate inequality.

So with the super rich having an increasing power and influence over the government, increased corporate donations and lobbying, more right wing scaremongering from the likes of Sun News, lower taxes on the wealthy, governments restricting the ability of unions to organize, have all resulted in extreme income inequality. This has meant no real change in real income growth for the rest of us, higher mental health problems, less social cohesion and no chance of any meaningful action on vital issues like climate change.It is a gross injustice and a waste to human potential. Income inequality is socially corrosive and divisive. Without a concerted effort to tackle income inequality, the cascade of privilege will continue down the generations, and equality of opportunity will be just a dream, for all of the evidence shows that greater equality provides the foundation on which higher standards of social well being can be built.

Due to my stutter, my words don’t always come out as planned, but I have a voice and I intend to use it, and keep on using it. It’s about an emerging awareness of a new dynamic between the many and the few. This conversation has started, and it won’t go away. I urge you all to do the same to raise awareness about this enormous gap between the super rich and the rest of us, which will only get worse if we don’t do something about it.

The majority of Canadians think income inequality makes the country less fair, we just have to keep reminding them of the facts, the consequences and the causes. Now we can open it up to you the audience and talk about the possible solutions we can take here in Canada to bring about a more egalitarian society. Income inequality has resulted from political choices, well now it’s time for new choices. Thank you for coming, and thank you for listening.