Victoria, BC — Residents of Vancouver Island, the Gulf Islands and the Lower Mainland are joining together the last weekend in July in a human-powered, multi-day flotilla through the Salish Sea and Southern Gulf Islands to demonstrate their passion for the coast and their commitment to protect it from the threat posed by oil tankers, pipelines and tarsands. 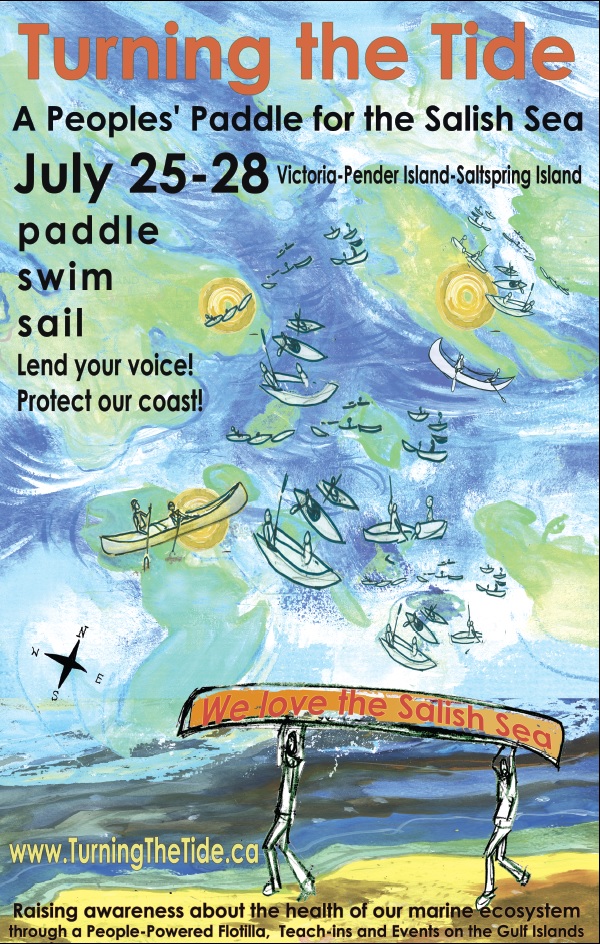 “Since the federal government approved the Northern Gateway pipeline, it is more important than ever to raise our voices in defence of the coast,” says Sasha Kvakic, a spokesperson for Turning the Tide.

“The peoples’ paddle for the Salish Sea is our way of showing how far we are willing to go in protecting ecosystems from a catastrophic oil spill. We want to show regular British Columbians who care about the environment that they are not alone, and that there are meaningful actions they can take to challenge the Harper government's tarsands agenda.”

Turning the Tide: A Peoples’ Paddle for the Salish Sea takes place from Friday July 25 to Monday July 28, proceeding from Swartz Bay on Vancouver Island to Port Browning Marina on Pender Island, to Ruckle Provincial Park on Saltspring Island, and then back to Swartz Bay. Island residents are hosting community gatherings on July 26 (Pender) and July 27 (Saltspring) featuring music, speakers and food to coincide with the group’s journey along the coast.

Turning the Tide is an initiative spearheaded by the advocacy group Social Environmental Alliance (SEA), in partnership with local First Nations and organizations including the Wilderness Committee and Raincoast Conservation Society.

“For me, Turning the Tide is about sharing an appreciation for these beautiful west coast waters,” says organizer David Monk. “But it is also about sending a message. British Columbians are united in opposition to the tar sands, pipelines and tankers that will wreak havoc on our coast. There is a strong message being sent to our political leaders, and I want to be part of it. I'm paddling because I love this coast, I love this land and I can't stand to see it destroyed.”

Turning the Tide is open to all members of the public who are experienced open-water paddlers, as well as members of all skill levels who wish to travel to Pender and Saltspring by ferry to rendezvous with the flotilla. Registration is open at www.TurningtheTide.ca.